The store will not work correctly in the case when cookies are disabled.

How to Use a Fire Extinguisher

How to Use a Fire Extinguisher

Safe Operating of a fire extinguisher:

Knowing how to operate a fire extinguisher could save your life in an emergency. The key to putting out a fire with an extinguisher is to use the
PASS strategy:

However, before you use a fire extinguisher to put out a fire, it's very important that you determine whether or not it's appropriate for you to be fighting the fire, and whether or not you'll be able to put it out. If you don't think you can fight the fire, or if you have any doubts, evacuate the building immediately and call the fire department.

Fires double in size every 60 seconds, so you don't want to be fumbling around in an emergency situation, reading over the instruction manual as a small flame on the stove grows into an inferno. 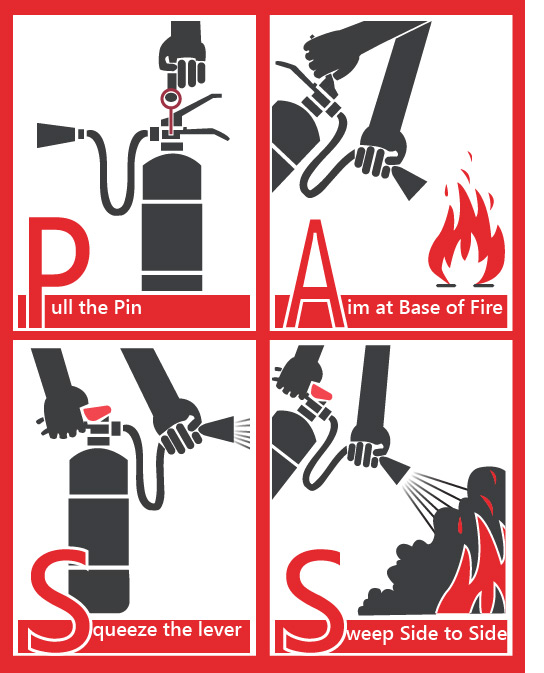 How to use an extinguisher video:

Reacting to a fire

Use a fire extinguisher for small, contained fires only.

2 - Stand with your back to an exit. Before you use a fire extinguisher to put out a fire, it's important to take a couple safety precautions. Locate the nearest exit, and position yourself so your back is toward the exit. It will make it easy for you to escape if you have to leave quickly in an emergency.

3 - Move to the proper distance. Many fire extinguishers have a range of between 2.4 to 3.7 m. Before discharging the extinguisher, move toward or away from the fire so you're standing 1.8 to 2.4 m away.

5 - Aim. Approach the fire standing at a safe distance. Aim the nozzle or outlet towards the base of the fire.

6 - Squeeze. Squeeze the handles together to discharge the extinguishing agent inside. To stop discharge, release the handles.

7 - Sweep. Sweep the nozzle from side to side as you approach the fire, directing the extinguishing agent at the base of the flames. After an A Class fire is extinguished, probe for smouldering hot spots that could reignite the fuel.

Below is a summary of the classes of fire, and a quick list showing which types of extinguisher should be used on each.  We then provide a detailed explanation of each type of fire extinguisher below.

The classes of fire

There are six classes of fire: Class A, Class B, Class C, Class D, ‘Electrical’, and Class F.

Water Fire extinguishers are for Class A fires only - they should not be used on Class B or E fires. The discharge stream could spread the flammable liquid in a Class B fire or could create a shock hazard on a Class E fire.

A Water extinguisher is identified by its all red cylinder and red band that runs around the top of the tank.

They are effective on Class A, B, and E fires. They contain a chemical powder called monoammonium phosphate which extinguishes the fire when it spreads and melts over the flames. This agent also works by creating a barrier between the oxygen element and the fuel element on Class A fires.

A dry chemical fire extinguisher is identified by its all red cylinder and white band that runs around the top of the tank.

BE dry chemical is for Class B & E fires only. It is important to use the correct extinguisher for the type of fuel! Using the incorrect agent can allow the fire to re-ignite after apparently being extinguished succesfully.

Carbon Dioxide fire extinguishers extinguish fire by taking away the oxygen element of the fire triangle and also be removing the heat with a very cold discharge.

CO2 fire extinguishers contain a non-conductive and non-corrosive extinguishing agent therefore will cause no damage to electrical equipment which make it perfect for areas such as electrical switch rooms, server/data rooms, electrical machinery and offices..

Carbon dioxide can be used on Class B & E fires. They are usually ineffective on Class A fires.

A CO2 extinguisher is identified by its all red cylinder and black band that runs around the top of the tank.

Foam fire extinguishers work by forming a layer over the top of the burning substance which stops the fire by cutting off access to oxygen. Foam extinguishers are effective to combat Class B fires. They can also be used for Class A fires which include wood, plastic, textiles, and paper.

Foam fire extinguishers are generally used within warehouse’s, petrol stations and storage facilities and are not recommended for use on class F fires (cooking oils and fats).

A Foam fire extinguisher is identified by its all red cylinder and blue band that runs around the top of the tank.

Wet Chemical Extinguishers  contain a solution of potassium, this solution smothers the fire and removes the element of heat. It prevents re-ignition by creating a barrier between the oxygen and fuel elements.

Wet chemical Class F extinguishers were developed for modern, high efficiency deep fat fryers in commercial cooking operations. They may also be used on Class A fires in commercial kitchens.

A Wet chemical fire extinguisher is identified by its all red cylinder and yellow band that runs around the top of the tank.